After nearly 30 years as a School Psychologist at Cayuga-Onondaga BOCES, Patricia Cahalan is still enjoying the work just as much as she did during day one on the job.

Growing up, Cahalan always knew she wanted to work in education, but also acknowledged that she didn’t necessarily desire a traditional teaching role. But in what she calls a “stroke of luck,” after graduating from college she started working at Canandaigua Central School District under a school psychologist, and her passion grew from there.

“I worked in a play therapy program for at-risk kids. I helped do play therapy for elementary students, and that was my introduction. And it was great,” she said. “I realized I was more of a one-to-one kind of person with the kids.”

Cahalan started her BOCES journey in 1995 as a School Psychologist working in Auburn Enlarged City schools, and nearly 30 years later, she still fondly remembers the support she received from her co-workers from the start.

“I had a lot to learn, but I also had a lot of support that helped me grow into my position,” she said. “I didn’t expect that I would stay with my first job out of graduate school for nearly 30 years.”

Cahalan said one of the best parts of her job is that she has the opportunity to work with students for more than one year, which allows her to form stronger relationships with each student.

“This position is very different from a typical school psychologist. I do counseling support and I love being able to work with students over several years. Some kids I’ve worked with for four or five years. I can really get to know the students and their families,” she said. “It’s a very unique position, and I feel lucky to have found it.”

Cahalan also enjoys the end of the year celebrations, including a special project she created to help students connect with special individuals from their past.

“My favorite thing is to work with the seniors and have them identify individuals during their school journey who have made the biggest impact. It’s always so interesting to see who they pick,” she said. “I help coordinate a meeting to give them an opportunity to tell the person why they were special to them.”

As for advice she would provide to a new BOCES staff member, Cahalan said to simply take advantage of the resources and support available to you, just as she did nearly 28 years ago.

“That’s what kept me at BOCES. I had people who mentored me and kind of recognized that I was young and needed some guidance. And I took advantage of that,” she said. “There are so many excellent people that work here, so just take advantage of that.”

In her free time, Cahalan enjoys watching and participating in sports, including triathlons with her daughter. She also enjoys spending time with her family on their lake house in Canandaigua. 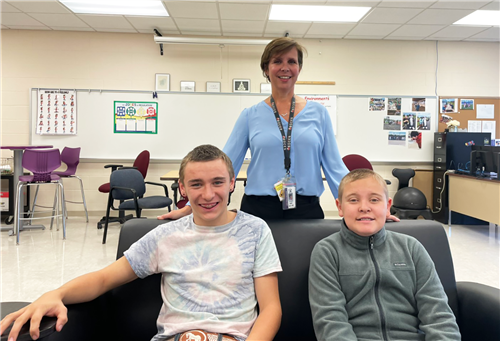